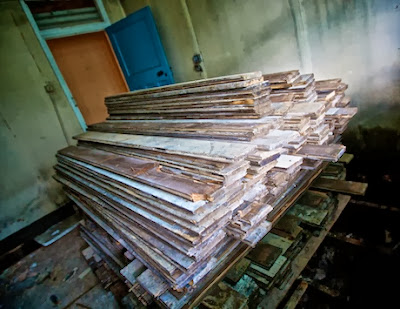 As regular readers will know, the fine folk at Bletchley Park are doing tremendous restoration work on wooden huts 3 and 6 to prevent these historic buildings from disintegrating due to weather damage and general dampness. “These huts were only put up as temporary structures," says Janie Price, Conservation Architect and partner at Kennedy O’Callaghan Architects, "so they probably would have expected them to be taken down after the war and it is extraordinary that they have lasted as well as they have." As well as a major grant from the Heritage Lottery Fund, they have also received a donation of a major consignment of floorboards from Fawley Court in Henley on Thames which operated as a military intelligence school during World War Two. This means the huts will have like-for-like, proper replacements for those which are unrepairable. Fawley Court has also donated 50 square metres of shiplap boarding for the outside of the huts. ---------------------------------------------------------------------------------------