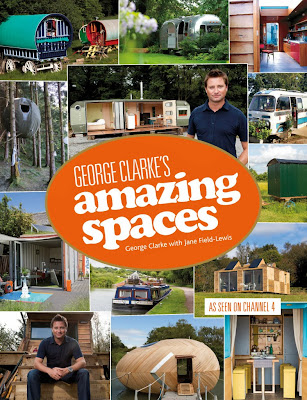 A new series of George Clarke's Amazing Spaces starts tonight at 8pm on Channel 4 and it promises to be as intriguing as series one. To coincide with the first programme, Quadrille has also just published a book of the same name written by Mr Clarke and Jane Field-Lewis of My Cool Shed fame which we'd certainly recommend to readers of Shedworking.

Along similar lines to Ruth Slavid's Micro: Very Small Buildings, Sally Coulthard's Shed Chic and Phyllis Richardson's Big Ideas, Small Buildings series, it looks at a very wide variety of microarchitecture including familiar favourites such as beach huts, shepherds' huts, and garden offices (although what they call a 'schoffice' is surely a 'shoffice'?). There are extensive sections too on small buildings on wheels, repurposed and multifunctional spaces, and selfbuilds, and as you would expect it features plenty of examples from both television series in considerable detail.

Although it's not a 'how to' book, there is a huge amount of general and sensible practical advice (a minor quibble, it would have been useful to include some kind of 'where to go for more information' section for books, websites, suppliers, etc) and the standard of colour illustration is very high indeed. Indeed, the inspiring photographs - and there are huge numbers of them - are probably it's biggest selling point - it's easy to see how this would inspire readers to have a go themselves at thinking small. Certainly in the running for a Shedworking 2013 award.