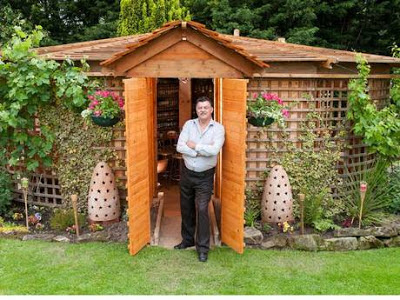 New research released today reveals 65% of British adults own a shed and the average shedowner spends more than a year of their life in their shed. In fact Brits love their shed so much that 6% would like to be buried in them.

The research forms part of the Shed’onomic report, an in-depth study of the nation’s shed behaviour commissioned by Cuprinol to mark the official launch of the annual Shed of the Year competition.

Kathryn Ledson, Cuprinol Marketing Manager, said: "It’s clear that sheds are vital to the British identity and that they are an inspiration to so many of us. At Cuprinol, we’re delighted to be the official sponsor of the annual Shed of the Year competition which celebrates the best of British sheds. If you think your shed is worthy of this prestigious title then you can enter at www.readersheds.co.uk from now until May 3.”

The Shed of the Year competition sponsored by Cuprinol is of course the brainchild of Uncle Wilco who launched the national competition seven years ago. Competition categories include:
• Normal
• Eco
• Garden Office
• Cabin/ Summerhouse
• Workshop/ Studio
• Unique
• Pub
• Tardis