More than 4.2 million self-employed in UK 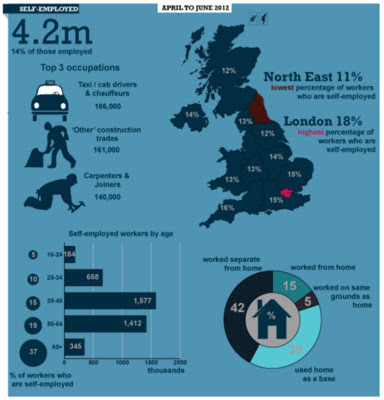 In April to June 2012, there were an estimated 4.2 million people in the UK who were self-employed
in their main job, according to the Office for National Statistics (or 14% of the 29.4 million people in employment).

There has been very little change in the top self-employed occupations over the last 20 years and in
2012 the four most common occupations were taxi/cab drivers and chauffeurs, ‘other’ construction
trades, carpenters/joiners and farmers.

The home is a place of work for some self-employed workers with 58% relying on their home to
carry out some or all of their working duties in 2012. 15% worked from their own home, 5% worked
on the same grounds or building as their home and 38% used their home as a base.

As people get older they are far more likely, if in work, to be self-employed. Just 5% of young
people aged 16 to 24 who are working are self-employed compared with 37% of those aged 65
and over.

Focusing on changes between April to June 2008, the start of the 2008/09 recession, and the same
period in 2012, the number of self-employed people increased by 367,000 continuing a rising
trend. The rise in self-employment over this four year period happened against a backdrop of falling
numbers of people working as employees which fell by 434,000.