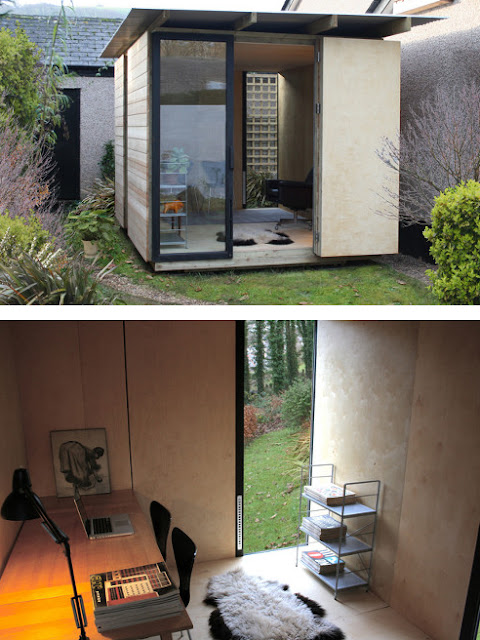 Based in Totnes, Mökki studios design, build and install garden offices in the southwest of the UK in Devon, Cornwall, Dorset and Somerset. They are designed by James Risebero, a practicing architect at Gillespie Yunnie in Dartington who says they can provide "a fully installed, modern, insulated garden office/studio at a fraction of the cost of a bespoke garden building". Here's their explanation:


Most bespoke garden buildings cost between 10 and £20K. Even "off the peg" models tend to cost over £1000 per square metre and often that doesn't include foundations. Mökki studios cost between £4,800 and £7,300 fully installed. That's approximately £800 per square metre.
The Mökki system uses standard building components in a highly efficient manner resulting in speedy manufacture and minimal or zero wastage. This is the amount of waste plywood left over after the manufacture of one of our buildings: 0

They don’t describe their system as ‘bespoke’, but it is flexible as panels can be combined in various ways.

Wednesday posts are sponsored by The Stable Company®, the UK's premier supplier of garden offices and garden rooms. Click here
Posted by Alex Johnson at 10:14 AM