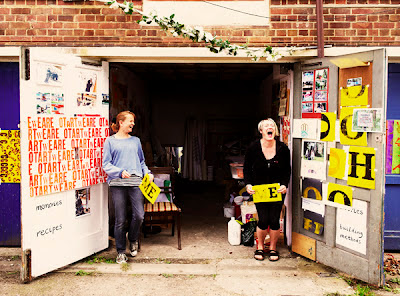 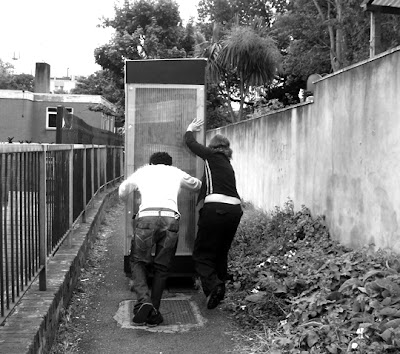 The drawing shed, a non-profit arts organisation based in Walthamstow, East London is the shedlike brainchild of visual artists/directors Sally Labern and Bobby Lloyd. It is made up of three mobile studios – the drawing shed, ClayOven and PrintBike – which are housed in garage/lock-ups on a housing estate in E17 from where the artists run socially engaged projects on the local estates, in the YMCA and across London. The drawing shed was established in 2009 by artists Sally Barker and Sally Labern as a custom built, portable drawing pavilion. Here's what they say about it:


"The two artists worked with an architect, Mark Parsons of Studio Polpo, to create a mobile drawing studio. the drawing shed was constructed in the café garden of the YMCA so that residents could see it being built. Over that first summer, it was wheeled around the community and workshops were held in various locations to get people talking and drawing together. the drawing shed aimed to use drawing as a medium which, as a by product, increased community cohesion and inclusivity, creating a safe space for residents to pursue their own creativity, take creative risks and experience drawing in the broadest sense."

Wednesday posts are sponsored by The Stable Company®, the UK's premier supplier of garden offices and garden rooms. Click here.
Posted by Alex Johnson at 2:34 PM