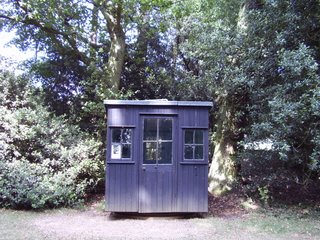 It’s good to be reminded that while the ‘garden office’ is essentially a 21st century creation, people have been working in sheds for centuries. The National Trust has several interesting examples at its properties, including Agatha Christie’s potting shed, three stylishly upturned boats on a titchy Gertrude Jekyll-designed garden in Northumberland, and at Tyntesfield in Somerset a shed where Victorian gardeners used to sleep in bunks over their workbenches. These and others are now featured on the NT site here.

However, one of my favourite sheds is not included, the writing hut of George Bernard Shaw at the NT’s Shaw’s Corner, Ayot St Lawrence, Hertfordshire (pictured). Hidden away at the bottom of the garden, it not only had an electric heater, but could be rotated to catch the sunlight or just change the view. Modern garden office designers take note.
Posted by Alex Johnson at 9:54 AM