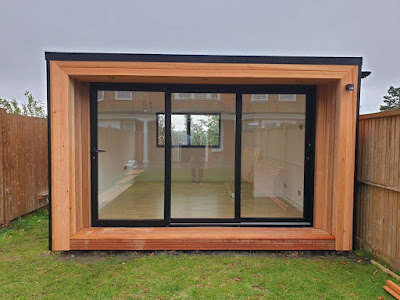 On the basis that you can't have too much of a good thing, here's the second garden office that Mark Flynn has bought from eDEN Garden Rooms. Mark, who runs Sliding Wardrobe World and was one of the company's first customers when they set up nearly a decade ago, left his first one behind when he moved house recently to Surrey. He decided to take the shedworking plunge again and with the same supplier. His new garden office, in cedar and black aluminium windows with overhang, is pictured above. Changes from his first build include using sliding rather than bi-fold doors, and installing a combined aircon and heating system rather than rely on underfloor heating (which comes as standard with eDEN).

" Having always worked from a garden office, I even found working in the house during the 2 weeks for build a challenge," said Mark. "It’s clear how much more productive I am working from my garden studio. And it made the house easier to sell without a doubt. We had a testing time moving and, in the end we sold our house three times, but each time we had found a new buyer within days and with the pandemic a ready-to-go-garden studio was clearly a big draw for prospective buyers.”