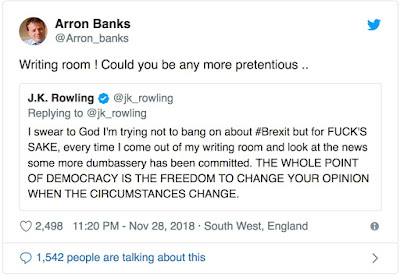 Those of you not on Twitter may have missed the current garden office/writing room debate kicked off by Brexit campaigner Arron Banks (although now he's kind of changed his tune) who criticised JK Rowling for having a writing room. As everything always does on Twitter, it's all kicking off and as you will not be surprised to learn, entirely against Mr Banks's position. Here are a few comments (warning, there is some poor language in the following tweets):

I have a writing room. It comes complete with writing dog. If you think that's pretentious, I'm afraid that's on you. pic.twitter.com/O47nkYqzDp
— James Oswald (@SirBenfro) December 1, 2018

I've a writing shed (& office/library), was a shed, took out end to remove carpenters bench (any offers?) replaced with reused double glazing, then insulated, added vinyl floor, shelves, plus a stove, and all by myself, why, because this writer needs more than a pen. Pretentious! pic.twitter.com/2sLhkgcfqG
— Bob Flowerdew (@FlowerdewBob) December 3, 2018

Like J.K. Rowling and Neil Gaiman, I have a writing room. Actually, it's a one-room studio. There's even a couch. And if you think that's pretentious, go fuck yourself.
— Stephen King (@StephenKing) December 1, 2018

I've had a "writer's room" since 1985, and the first house we were renting, when I was still a journalist. It's the room you do the work in. The idea that you don't get a room to work in is the same as the idea that writing isn't work. https://t.co/4e7EBnLj0Y
— Neil Gaiman (@neilhimself) December 1, 2018

My current writing room: it's a cabin in the woods. Most days I look up from writing to see deer, chipmunks or even bears wandering, scurrying, or lumbering past. It's a good place to work, because if you are a writer people don't always leave you alone to write. pic.twitter.com/FuNNQu6RW2
— Neil Gaiman (@neilhimself) December 1, 2018

You can catch up on the whole sorry spectacle on Twitter here.

Tuesday posts are sponsored by Garden Spaces, suppliers of contemporary garden buildings, offices, gyms and studios, many of which do not require planning
Posted by Alex Johnson at 9:31 AM