Photographer Chris Walter has come up with what must already be in the running for Shed of the Year 2018. He uses his Bauhutte - inspired partly by Noggin the Nog - for a variety of things but especially for designing and building cameras. It has running water, full electrics and an antique Norwegian stove, but there are also many lovely touches such as the dragon handles (below). 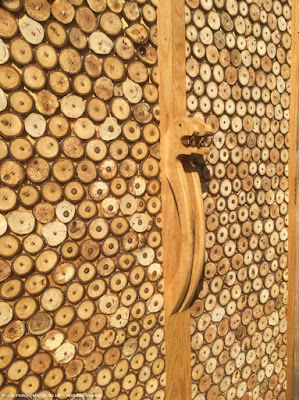 The whole build is inspired by a Ben Law design with curved shingle walls and roof and wood roundel covered doors. Plenty of the construction material including insulation has been recycled from other buildings. And the term 'bauhutte'? Here's Chris's explanation:


The name Bauhutte comes from the middle ages when all the craftsmen and artisans would stay in a shed on site - the Bauhutte - and discuss their building and design ideas and drink tea (or mead). This idea of keeping art, design and craft together was revisited in the early 20th century when Bauhutte became Bauhaus.

Monday posts are sponsored by garden2office, the Swedish garden office specialists. Click here for more details.
Posted by thealexjohnson at 9:49 AM