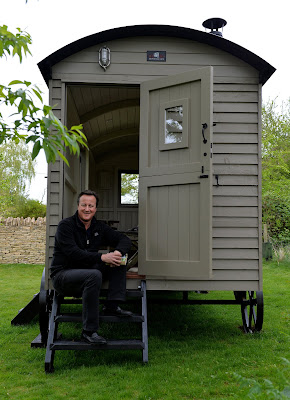 The former Prime Minister David Cameron has invested in a Red Sky Shepherds Hut to write his political memoirs. There is also a neat twist to the choice as they describe on their website:


When Paul Bennett of Red Sky Shepherds Huts answered the phone one day this January, it led to a conversation he would never forget.  The caller was David Cameron, recently stepped down from political life and calling from his Cotswold home. He wanted to buy a shepherd hut.  Little did they know that both men were already connected through one of life’s charming twists of fate.  The hut that Mr Cameron was about to buy was only made possible by his decision, some years earlier and while in power, to change the rules on pensions. He allowed people to cash their pension in at age 55 and use the money to do things like Paul did – start a shepherd hut business!

The bespoke build is a 16ft x 7ft classic shepherd hut shape with an arched roof, metal wheels and painted hardwood stable doors, plus a woodburning stove and a pullout double sofa bed. Mr Cameron told Red Sky that there is some competition for the hut's use - while he has marked it down as a garden office writing space, his children want to use it as a play space and alternative bedroom.