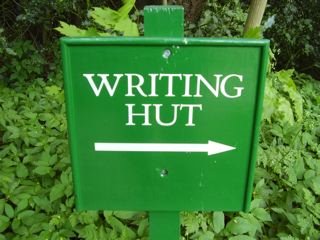 I haven't been able to track down the full text of this article by Alice McEwan on Shaw and his writing hut - George Bernard Shaw and his Writing Hut: Privacy and Publicity as Performance at Shaw's Corner - but the abstract sounds intriguing.


This article will argue that the locus of [Shaw's] fluidity and theatrical imagination was a writing hut in the form of a revolving shelter, built in a secluded part of the garden, hidden from view. Equipped with a bed and a writing table, Shaw fashioned an outside study as an intermediate space. A site for the performance of the self and an advertisement for his socialist ideas, it was particularly constructive in the promotion of health reform. He ensured that his hut gained notoriety worldwide through the mass media in the form of journal articles and photographs, against the backdrop of his own burgeoning interest in photography and the media. Through the Habermasian theory of “audience-oriented subjectivity” and the ideas of architectural historian Beatriz Colomina, Shaw is considered in ways that have not previously been recognized: anticipating the concerns of modern architecture and Modernism, dematerializing boundaries between inside and outside, between privacy and publicity.