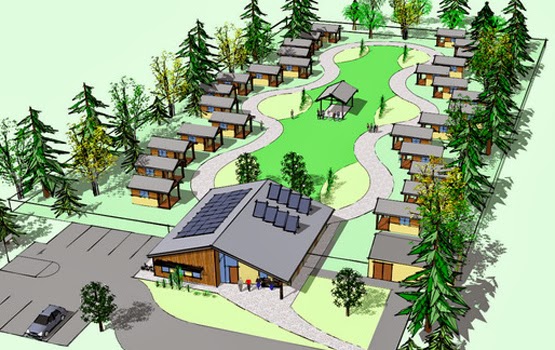 Tiny homes seems to be the flavour of the year in 2014. Here's an interesting article in Yes magazine by Erika Lundahl suggesting that they can help ease the problem of homelessness. Here's a snippet:


On a Saturday in September, more than 125 volunteers showed up with tools in hand and built six new 16-by-20-foot houses for a group of formerly homeless men. It was the beginning of Second Wind Cottages, a tiny-house village for the chronically homeless in the town of Newfield, N.Y., outside of Ithaca. On January 29, the village officially opened, and its first residents settled in. Each house had cost about $10,000 to build, a fraction of what it would have cost to house the men in a new apartment building. The project is part of a national movement of tiny-house villages, an alternative approach to housing the homeless that's beginning to catch the interest of national advocates and government housing officials alike.

Wednesday posts are sponsored by The Stable Company®, the UK's premier supplier of garden offices and garden rooms. Click here
Posted by Alex Johnson at 6:33 PM