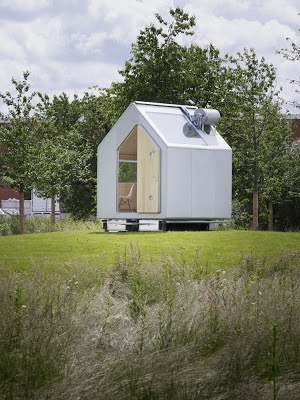 A rather lovely shedworki9ng design by architect Renzo 'The Shard' Piano, the wooden Diogene is his smallest building which apparently fulfils one of his longest ambitions (to work in minimalist housing). It's a living space measuring two by two by two metres, enough for a bed, shower, toilet and a small amount of furniture. He calls it a "voluntary place of retreat" which operates anywhere and independently of local infrastructure - it has photovoltaic cells, biological lavatory, triple glazine and a rainwater tank - and was at least partially inspired by Le Corbusier's Cabanon. It's being roadtested by the public at the moment before a decision is made to go into production or not.