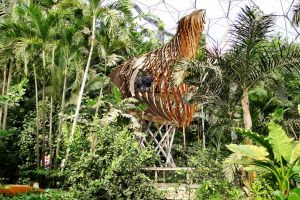 Heather Mills, the charity campaigner and ex-Mrs Paul McCartney, is joining the growing roll of celebrities with Blue Forest treehouses in their garden such as JK Rowling. She has applied for planning permission to build a pretty spectacular single-storey one with a floor space of 21 squared metres at her home in Robertsbridge which features a climbing wall, two spiral staircases, rope bridge, swings and a fireman’s pole. It's not actually a real treehouse since the whole thing will be on stilts.