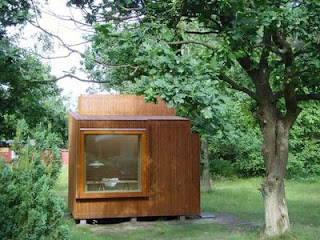 Not each of course, but shedworkers, homeworkers and other small businesses in Britain are facing a potential £1.4bn annual loss of revenue by failing to safeguard against business threats, according to new research.

The Lloyds TSB Insurance Big Issues for Small Businesses report revealed 1.7 million (38%) microbusinesses were affected by significant incidents such as theft, vandalism or damage in the last year alone. Following this almost a third (31%) of those affected were unable to operate fully for longer than a week.

For around one in five (19%) it took up to a month to be fully operational, potentially risking a further £3.4bn3 loss.

The research - which polled British businesses with ten or fewer employees - revealed that just under one in 10 (7%) owners who have experienced an incident in the last year worried their business wouldn't survive as a result. Yet over a third (36%) of the nation's small business owners haven't taken any measures to protect their business.

Damien McGarrigle, head of business insurance at Lloyds TSB Insurance, said: "These businesses are the backbone of the economy, but many are unnecessarily leaving themselves exposed and vulnerable without adequate protection in place. Unforeseen incidents are likely to have greater impact on a small business, which could jeopardise its future, putting a strain on owners and their families if they are underinsured. Making sure appropriate insurance cover is in place safeguards against the main risks and liabilities, leaving business owners better positioned for success."

Moreover, for more than a quarter (26%) of microbusiness owners, weekends and days off are no escape from the worries of running a business. The poll found that one in five (17%) of those aged 35-44 worry that their business is having a negative impact on family relations, compared to just one in 20 (6%) aged 55 and over.

Wednesday posts are sponsored by The Stable Company®, the UK's premier supplier of garden offices and garden rooms. Click here
Posted by Alex Johnson at 9:19 AM