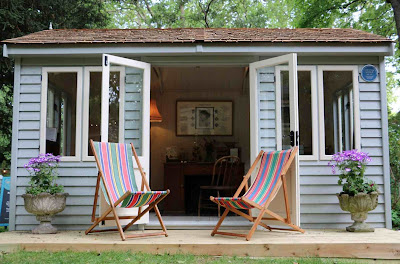 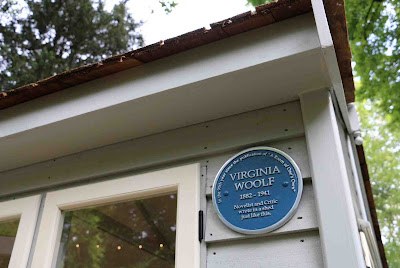 If you were at the Chelsea Flower Show this year, hopefully you managed to get a look at Malvern Garden Buildings' latest design, their Woolf Writing Shed. We'd wondered if it was a one-off but happily they have just confirmed that it will soon be part of their permanent collection soon (Scotts of Thrapston used to offer a similar kind of design several years ago but that is no longer available). The shed is painted in dove grey like Woolf's writing lodge at her home at Monk’s House, and features double French doors, and a decked are.

British designer and Virginia Woolf’s great niece, Cressida Bell (pictured below) described the design as a "nurturing and relaxing environment" and a fitting tribute to Virginia. "In her essay ‘A Room of One’s Own’ my great aunt Virginia Woolf writes that in order for a woman to write fiction she must have two things, a room of her own and enough money to support herself.  I am in complete agreement with her on both counts, but the having the first is a very important step on the path to gaining the latter.

"I am lucky enough to have a large studio away from my house in which to create, but I need the extra space as I am a printer – as well as a designer. It is where I run my business, but also a place of great creativity. Though it is in urban East London it is surrounded by a leafy courtyard, so I have the calm of a garden to retreat to at lunchtime and after work." 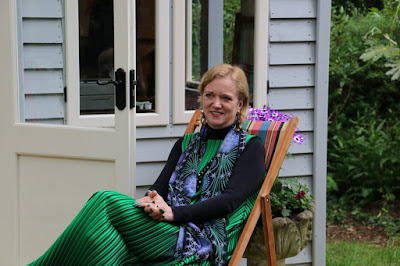