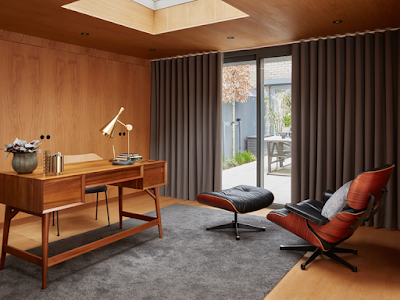 It's no surprise that George Clarke, the presenter of many house/home programmes on the television and perhaps best known for his Amazing Spaces series and work with Shed of the Year, also has a garden office at his home in London. In an interview with the Daily Mail (in which he explains why he keeps certain objects in his shedworking atmosphere) he says that it "is where I escape to read and write. It’s so peaceful except for the rumble of the Tube going past, but I love that."

George also does some work with window coverings specialist Hillarys who have this to say about his garden office, pictured above in what must be the tidiest setup we've ever seen:

And here he is giving a tour of his garden office, with a special focus on his curtains, plus a bonus look at another garden building used as a spare bedroom.

Tuesday posts are sponsored by Garden Spaces, suppliers of contemporary garden buildings, offices, gyms and studios, many of which do not require planning
Posted by Alex Johnson at 12:54 PM