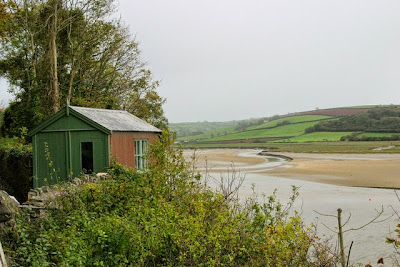 As many of you know, there are plans afoot to build a wind turbine smack in the middle of the view Dylan Thomas would have had from his writing shed. The latest update, as reported on Wales Online
is that a judicial review of the planners' decision to green light the scheme - which would see a 45m turbine across the estuary from the Boathouse -  has now been granted.

According to Wales Online, "Opponents say the turbine will blight a view that has attracted international tourists and Dylan fans for decades." A final decision will now be made in early 2015.

Tuesday posts are sponsored by Garden Spaces, suppliers of contemporary garden buildings, offices, gyms and studios, many of which do not require planning
Posted by Alex Johnson at 7:40 PM