Record number of homeworkers in Britain 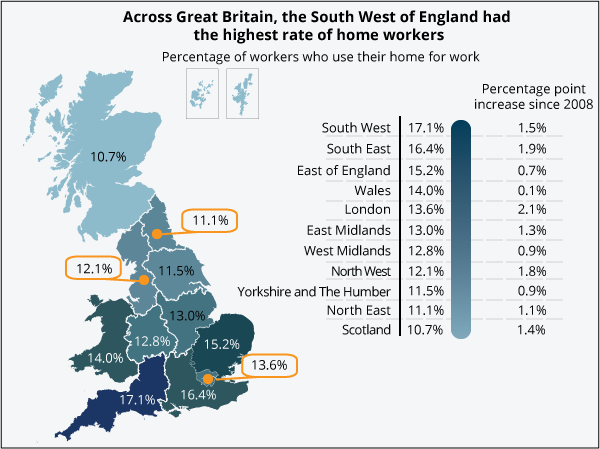 Latest figures from the Office for National Statistics reveals that there were 4.2 million homeworkers in the first three months of this year or 13.9% of those in work. This is the highest rate of homeworking since comparable records began in 1998.
Of these homeworkers, around 1.5 million worked within their home or its grounds, while the remaining 2.7 million people used their home as a base but worked in different places.

The number of homeworkers has grown by 1.3 million since 1998. However over the same period the number of people in work has also been rising. The percentage of those in work who work from home (also known as the home working rate) increased from 11.1% in 1998 to stand at a rate of 13.9% at the end of March which is the highest than at any point in the past 15 years

ONS's report says that the jobs that homeworkers carry out tend to be concentrated in higher skilled roles than those of people who do not work from home. Of the 4.2 million homeworkers in 2014, 14.8% were working as managers or senior officials, 35.2% were professionals or associate professionals and a further 23.5% were working within skilled trades.

Earnings for homeworkers reflect this concentration in high-skill roles, the median being £13.23 an hour compared with £10.50 an hour for other workers. The most common roles for male homeworkers were among construction occupations, while for women the top roles included childminding and care work.

Wednesday posts are sponsored by The Stable Company®, the UK's premier supplier of garden offices and garden rooms. Click here
Posted by Alex Johnson at 12:04 PM