Suppliers up in arms over Government's new tax on sheds 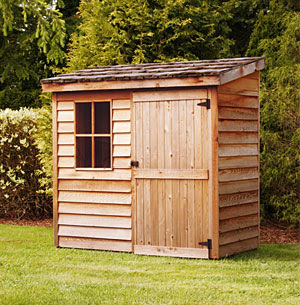 We've had the Granny Tax, the pasty tax and now there appears to be a Shedgate brewing. The introduction of 20% VAT on sheds, summerhouses and other garden buildings announced this morning is set to give the Government another troublesome week.

Speaking on Andrew Marr's television show this morning, the French-born Minister for Outdoors Ms Avril Poisson said garden offices would now be subject to VAT once they are heated to "above air-ambient temperature", although most garden buildings already in situ would be exempt as they have already been heated to improve their appearance.

The aim of the change is therefore to "clarify the definition of 'ambient shedworking' to confirm that all sheds (with the exception of conservatories) that are above ambient temperature when supplied to the customer are standard [VAT]-rated". There are now fears that the price of the average shed could rise by around £5,000: the leading shed supplier Shedcoukcom has seen millions wiped off its share price and is considering legal action if the proposal isn't scrapped. Independent MP Doug Ground evoked the warm weather to point out other difficulties. "With the weather as it is today," he told the Commons Treasury Committee, "a lukewarm shed is not VAT-able because the ambient temperature outside is the reference point, whereas if it is the middle of winter and freezing cold, it is. It's an extraordinarily complex situation when you are having to check with the Meteorological Office on whether or not to add VAT on sheds."

A separate announcement about metal sheds is expected this afternoon.

Update: A spokesman for Oazis Garden Offices has also entered the debate.
Posted by Alex Johnson at 8:53 AM